Varroa mites are visible to the eye.  They attach themselves to the exoskeleton of the bee, chew a couple holes to feed on the bee's fat and hemogloblin. (eewww)

The mites are a vector for viruses and other pathogens that can sweep through a beehive like a plague.  The most prevalent and deadly virus is called Deformed Wing Virus (DWV).  While the specific virus that caused colony collapse disorder (CCD) is not positively identifed, it doesn't really matter.  It is mites that enabled the virus in the first place.

DWV and other viruses continue to be major challenges for beekeepers worldwide.

they provide important forage for honeybees, pollinators and wildlife

Other factors impacting honeybees include:

"What's going on with the honeybees?"

Indeed, beekeeping and honeybees are in trouble.  It is harder and more expensive than ever to keep bees. For the last several years, Maryland has experienced a 60% loss of its hives.  YIKES

The problem is all about a mite called varroa destuctor.  The mite started out as a minor pest on another species of bee in Asia but managed to jump to our honeybee (species jumper).  It has spread worldwide (invasive) and has caused havoc and destruction in its wake.

Honeybee are insects (6 legs, 3 body parts and 4 wings ).  Mites are a different class, arachnids (8 legs and 2 body parts) like spiders and ticks.

The Truth about what is going on with the honeybees

What can be done?

Good question, indeed.  Beekeepers are doing what they can with some success and some failures.  Varroa and its associated viruses seem to adapt as quickly as we do.

Will honeybees survive this plague?  Yes, without a doubt.  The better question regards the survival of beekeepers. 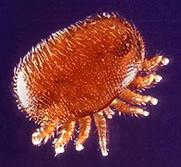