All honey will crystalize over time.  It is completely natural and does not imply spoilage.

Crystalization is where the honey becomes "spreadable" or non-liquid.  Tiny naturally forming crystals in the honey bond together but forget that science stuff.

To decrystalize honey, remove the lid and place in a sauce pan filled with the hottest water out of the tap.  Do not apply a flame as it will ruin the flavor.  Do not put it in the microwave - it won't work out like you would hope.  You will probably have to refill the sauce pan with hot water a couple of times.  Once clarified, the honey is as good as new.  Easy peasy!!

In fact, honey doesn't spoil.  They have found honey in the Egyptian pharaohs tombs that was still edible (although a little too dusty for my taste).  If BeeGeorge Honey has been sitting on your shelve more than a couple thousand years, just pitch it. Otherwise, it is still perfectly good. 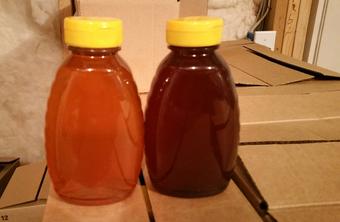 You may notice that there is some color variation between jars of BeeGeorge Honey.

Honey comes from the nectar of flowers.  The specific mix of flowers determines the color and the flavor.

BeeGeorge honey is "wildflower" which just means that the honey is from whichever flowers were in bloom.  Every location will have its own mix of flowers with corresponding differences in flavor and color.  The eastern shore of Maryland consistently produces a wonderfully flavorful and thoroughly enjoyable honey.  It is works perfectly in cooking, on a sandwich or straight out of the jar.  Although slight, there are even taste distinctions between seasons!

In my opinion, it is the best honey available anywhere in the world.

Most of BeeGeorge honey would be described as "amber" in color with a few jars as "light amber" or "dark amber."  There are even some individual jars where there is a color difference distinctly visible!  Cool huh!

The flavor difference between the amber, light amber, and dark amber is subtle but noticeable.  Typically I only get a little light and dark amber each year, so be sure to grab a bottle when you see it.